How Cheap Can a Man Eat, Part Four: The Aftermath


Well friends, the simple diet experiment has come to an end!  And since I blabbed so much about it in the first place I figure I owe you all a recap of how it went and what I learned.

For those who missed all the hype at the outset, the simple diet experiment was a six-week experiment to see how cheap I could eat (in order to give more money to hunger relief) and to see if I could break my dependence on eating for comfort. My diet over the six weeks consisted of:

So… here are the results:

First off, the diet was exceptionally cheap. My wife Amy did the diet with me (75% of the time, anyways), and I think that between us we ate for about $200 over the six weeks. Honestly, this was even cheaper than expected. But consider this:

Throw in potatoes, fruits, veggies and protein powder and that was about it.

In general, the diet was actually not as hard as I thought it would be. I got some nice breaks from friends who invited us to dinner and to their homes, and I found that I can be pretty content with any of the above foods if they are seasoned and especially if there are sautéed onions involved.

However, there were two significant challenges. One, when I started running hard again during the diet I needed more calories, so I added some peanuts and peanut butter to avoid being perpetually “hangry.” Second, as expected, it was very hard to give up snacks at night. Admittedly, I cheated a couple of times, but found that all it took was something really small (couple bites of apple sauce, a few saltines, a graham cracker) to satisfy me. Since I didn’t get much sugar during the day, just that little bit at night or an extra pinch of salt did the trick.

All that being said, I was THRILLED this past weekend to eat cereal again, and popcorn, and to NOT eat rice and beans. I think I could eat eggs about every day, and I even like oatmeal now (gasp!) but by the end I was so tired of rice and beans, that even my extremely bland sandwiches (of which I was previously tired of) seemed like a gourmet meal.

So what did we learn from all this?

One, it’s not hard to save money if you are willing to give up a little time for preparation. For example, a can of seasoned black beans costs about $1 and if we have black beans as a family we eat about a can and a half. But as I said above, we can eat black beans every day for a week for $2 if we buy them dry! It just takes a little time and effort to cook them and season them, but obviously that’s a huge difference. I realized in this process that this dynamic is at work in many food items we buy- we’re not paying for the food itself, we’re paying for the convenience of someone else preparing it to be eaten.

Now you might say, “I don’t have time to prepare food, so I have to pay.” BUT, how much time do you spend deciding what to eat? And shopping for it? The beauty of the simple diet is that it takes NO time to decide what to eat (you don’t have options!) and I spend much less time at the store. So the time basically balanced out. This of course points to the other financial lesson here- make a list before you go to the store and stick to it! Even if something is a “good deal” you can only save money if you don’t spend it.

The big “breaking dependency” lesson I learned in this is that if you get rid of sugar and salt in 99% of what you eat you will truly appreciate and be satisfied by the 1% that you do get. Our favorite items are even more special if they are rare. We are content without them, and perhaps joyful with them. And that beats being unsatisfied/discontent without them and only satiated with them.

So, now the question is, how do I integrate this into my life for the long-term? Right now, I’m thinking that I’ll take one week a month to eat simply for the original reasons of giving more to those in need and to serve as a reset against “living to eat.” But it could also work by spreading out the simple eating days in the month… like two simple eating days a week, or two or three stretches of three simple days in a row per month. (In general it’s best to lump them together so you can cook in bulk and save time.)

And now I turn the question to you, faithful reader. Do you agree with me that however it’s done, it’s worth giving up our favorites foods a few times a month to keep someone alive? If so, I urge you to act! Whether you forgo eating out a couple times a month, or fast for a day, or try out the simple diet, please consider making this small sacrifice so someone else can eat!  Check out www.poverty.com for details on the organizations who leading the fight against hunger and who could transform our small sacrifices into saved lives.
at June 20, 2018 No comments:

The Lights on Broadway 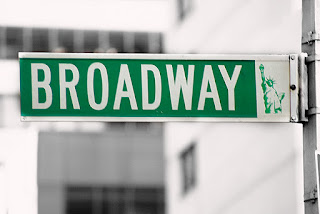 Well fearless readers, Burning Bush Communities has finally made it to Broadway!

No, no, not that Broadway. But who needs that anyway? We’ve got a much hotter and more “authentic” Broadway, with plenty of character(s) and even a few flashing lights (sirens count, right?). So basically we made it to the top!

Okay, enough jokes. Today we are signing the lease for our new space at 3594 Broadway Avenue, Suite E. Right now, she ain’t much to look at- and perhaps she never will be- but we’re very excited about using this space to serve the greater Broadway neighborhood. (For those of you familiar with Fort Myers we’re in a big neighborhood with boundaries roughly at 41, MLK, Fowler and Winkler.)

We have two goals for the space:
Serve local ministries who don’t have office and meeting space, and,
Serve at-risk students in our neighborhood through whatever means we can find.

As of right now, we are working on developing a partnership with another local non-profit to provide a free after-school program for neighborhood children, and we are dreaming up and planning a mentoring program for middle or high school students who attend schools in or bordering the neighborhood. Please keep these items in your prayers as over the summer as we have lots of work to do!

More on the space to come in future posts, but for now I’m off to find a delicious (yeah right) and "simple" snack because it is the LAST WEEK of the simple diet experiment! Thank you Lord we have almost made it because I am really tired of rice and beans! (I will post some reflections on the diet next week, FYI.)