Excursus: The Mission to Reveal and Invite

In the previous post I shared my take on the mission of the church as:


Today, as I was finishing up The Sermon on the Mount and Human Flourishing, an excellent book by Jonathan Pennington, I came across this passage regarding the mission of the people of God, and I am compelled to share it as a similar perspective on our mission, and far more eloquently said:

As the church awaits the return of the risen Savior, the disciples of Jesus are invited into a way of being in the world that leads them into an experience of present-but-not-yet-full human flourishing, aligning them with the reason God created the world as the place of life and peace for his beloved creatures, and empowering them to be engaged in bringing flourishing to the world. Jesus is the sage and king who is inviting hearers into his coming kingdom of flourishing and life. The Sermon is at the center of this message. (309, italics my own)

In Pennington's view, disciples of Jesus we are invited to embrace and embody Kingdom life (which is the place of flourishing, in Pennington's words), and through the Spirit we are empowered to manifest this flourishing life in and into the world. This "bringing flourishing to the world" is what I refer to as "revealing the King and Kingdom." It's not making the world flourish, but rather demonstrating the flourishing Kingdom and blessing others with its presence, and then following in Jesus' footsteps to invite others into this "kingdom of flourishing and life." 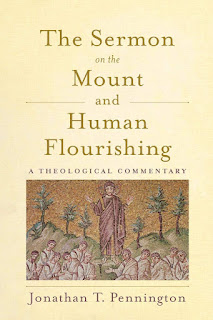