It's not everyday that a former communist leader offers advice to the church. In this respect, Douglas Hyde's Dedication and Leadership is a unique and fascinating book. Hyde worked his way up in the Communist Party in the UK in the 1930's and 1940's, and in his journey he did just about everything from training new recruits to publishing tracts to traveling all over the world to birth new Communist cells. However, in 1948 he renounced communism and converted to Catholicism. Dedication and Leadership is a call from Hyde to the church he loved, in hopes that the church would reclaim its heritage of producing dedicated and passionate leaders.

While Hyde looks at many of the successful methods that communists employ, in the he believes that the difference is all about high level of commitment that is expected of every communist. Hyde finds this dedication at play in all the steps that communists use to develop leaders:

1. A radical vision of a transformed world proclaimed;
2. A leadership that models dedication to this vision;
3. The expectation and necessity of sacrifice to join the organization;
4. The expectation that all who make this sacrifice grow to lead others in the same manner.

Of course, as a Christian I look at that list and cringe, because that list of attributes is ours! There is no greater vision of a transformed world than the Kingdom of God. There's no higher call to sacrifice than that of Christ. And there's no system of developing dedicated leaders more compelling than Christ to the apostles to the early church. Once upon a time these were our strengths.

Dedication and Leadership is a butt-kicker on many fronts, but is a Burning Book because Hyde is a true believer that ordinary men and women can be equipped to do amazing things. Over and over Hyde witnessed ordinary men and women become communists and bring about radical change. The reason they were able to is because they had leaders who believed in them and expected this of them. My hope for Burning Bush is that we can one day say the same... That we made a Kingdom impact because, with the help of the Holy Spirit, we called, we trained and we supported ordinary disciples whose dedication to Jesus- and not human talents or ability- made the difference. 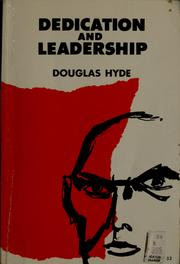