This one's for you Mike 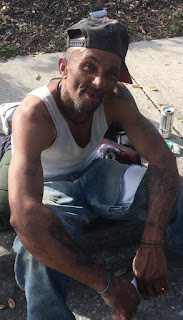 Yesterday during a Good Samaritan Cycling Team outing I had the pleasure of meeting Mike Rivera, the man pictured on your right. Mike was hanging out by the Racetrac at 41 and Edison with some other folks who we serve and as soon as I pulled up he engaged me in conversation.

A few things caught me off guard with Mike. One, most people who we serve hesitate for a moment or two before they engage with us the first time. (After all, couple of guys riding around on bikes giving out water is pretty strange!) But Mike warmly greeted me and engaged immediately. Two, Mike had no hesitation about sharing his story, and was brutally honest about his mistakes with me, a complete stranger. Third, Mike was just at the point of deciding to start fighting to get a little of his life back. He was ready to look for work, and ready to be done with the streets. I almost never get asked for prayer from people in Mike's place (I usually do the offering), but Mike asked. He knows he can't do this thing alone.

Finally, Mike writes poetry, as his way of dealing with his situation and giving something small back to the world. He offered to share a poem with me, and it was both a confession and a subtle word of warning about who we serve and the consequences.  I asked him if he'd like for others to get to hear it. He said yes, so it's my pleasure to have it for you in the video below. So here you go Mike, this one's for you, and don't give up the fight to get back on your feet!